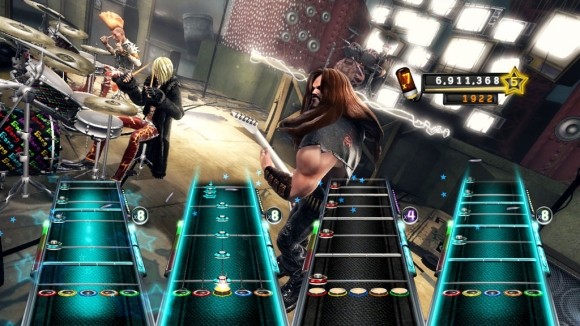 Yes, there are new things in Guitar Hero 5! Producer Brian Bright told 1UP about the new "Rockfest" multiplayer, which he described as "a suite of new multiplayer game types in Guitar Hero 5 that can be played individually or in teams." These different games can be strung together in a "playlist" so that each round of multiplayer involves a different goal. That's kind of clever!

The "Rockfest" games include:

* "Momentum," in which all players start at medium difficulty, which increases with every 20-note streak and decreases with three missed notes.
* "Streakers," in which points are awarded only for consecutive notes played while nude in multiples of ten. "One point for the first 10 note streak, two for reaching 20, three for 30, and so on."
* "Perfectionist," in which each section of a song is scored by percentage of correct notes, with the top player receiving four points, the next best player receiving two, and third place receiving one.
* "Do or Die," which knocks a player out for the remainder of a section for missing three notes (otherwise known as the "Not Fun" variant).
* "Elimination," in which low-scoring players are eliminated at regular intervals.
* "Pro Face-Off," which is a basic score competition.

We're surprised to see the inclusion of game mode that deliberately kick players out before the end of the song -- in some cases, quite early into the song. You know, since drop-in gameplay has been the other biggest feature announcement. Bright did say this is for the "more competitive players," so maybe it's seen as compensating for the "Party Play" mode. See some footage of Rockfest play after the break.
_________________