Join the forum, it's quick and easy

There's something comfortingly retro about Wolfenstein, the new first-person shooter from Activision, id Software, and Raven Software. The original Wolfenstein 3D shipped more than 17 years ago and as you probably already know it popularized the first-person shooter. Before Half-Life made scripted shooters all the rage, Wolfenstein 3D relished in the pure simplicity of roaming around big levels and blasting Nazis with an ever-escalating arsenal of weaponry. Call it the Inglorious Basterds of its day. This new Wolfenstein definitely borrows the spirit of the original, but it also has some new baggage, as well.

You play as Allied agent B.J. Blazkowicz, basically every German's worst nightmare. In Wolfenstein, you uncover a mysterious artifact using something called Black Sun energy, and it's up to you to stop the Third Reich from developing it into a weapon. And like that, you're sent to the city of Isenstadt, deep in the heart of Germany. There, you'll work with the local resistance group and another faction to halt the nefarious Nazi plot.

This isn't a purely linear, scripted game. Instead, like the upcoming Halo 3: ODST, the idea is that you use a city level as a hub of sorts that launches you into various missions. This lets you explore the city quite a bit, much like you may have explored the levels in the original Wolfenstein 3D. When you come upon German patrols, it's time to have some fun. You can meet up with contacts to get missions, which then lead you to various jumping off points that launch you into different levels. Once you're done, you return back to the city levels.

Unfortunately, this is where Wolfenstein also stumbles, because it feels like the designers didn't have enough faith in their ideas to fully develop them. You might think that this is a relatively large world or a blend of FPS and RPG, where you can accumulate quests from NPCs and then decide which ones to pursue. Instead, this freedom only gives you a thin illusion of open world gameplay. The city levels of Isenstadt are incredibly compact, and navigating it only takes a handful of seconds rather than minutes. You'll run along the same streets and alleyways a ridiculous number of times over the course of the game as you go between contacts of the local resistance group and other factions. Before long, exploration quickly gets dropped, especially since there's not much need to look at your in-game map as there's a constant marker on the compass telling you exactly where you need to go. 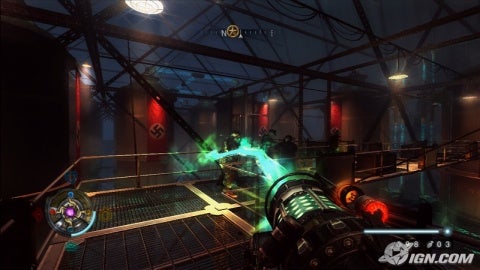 Meanwhile, the mission structure is also fairly linear; you complete a mission for one group and then they tell you to go talk to another faction that will give you another mission, and so on. There's not much sense that you've got a lot of choice or freedom in the matter. There's no currying favor with one faction or displeasing another, either. They're just telling you where to go and what to blow up. At least the good news here is that there's a lot to blow up.

Combat in Wolfenstein might surprise you with the amount of environmental destruction at work. While you can't blow up walls and buildings, a lot of stuff does fly when grenades detonate, and plenty of cover gets shredded by gunfire. The core idea of killing Germans is in good effect, as you can blast them with conventional weapons and when that gets boring or you start running low on ammo you can pull out your more exotic gear, such as the particle beam that pretty much vaporizes enemies. You can also upgrade your weapons considerably, using gold that you find and recover from the levels. You can't afford to upgrade every weapon, but if you have a favorite you can boost its range, accuracy, recoil dampening, and much more.


This wouldn't be Wolfenstein without a supernatural element. In this case, it's a mystical amulet that gives you special powers. Veil Sight sort of acts like night vision, but it also highlights enemy weak spots and, more importantly, it lets you travel to another dimension where obstacles in the real world might not exist. If there's a solid brick wall ahead of you, turn on Veil Sight and you might discover a gaping hole that you can walk through. This facilitates exploration and can be used to flank dangerous enemy positions. The rest of the powers are familiar to shooter fans; there's a bullet-time like ability, a shield ability, and a shield-penetrating ability that's useful in puzzle situations as well as against certain enemies.

Speaking of enemies, they'll run the gamut from Wehrmact infantry to SS troopers to Veil-enhanced foes, such as the armored Heavy Trooper and the Assassin. The more exotic foes are dangerous, but they have specific weaknesses that can be exploited if you use your Veil powers. And you might as well use them, too, because there's not much use rationing the Veil powers given that there's no shortage of special Black Sun recharge points throughout the game. 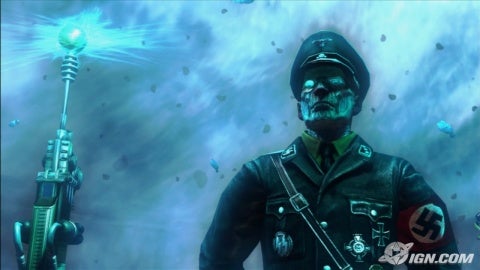 Oh, those evil SS are at it again.

Wolfenstein has a solid, graphical look, but it really begins to shine when you get into the missions that take you out of the city. There are a variety of environments that are well rendered, from an outlying farm to a vast underground facility to a monstrously huge zeppelin. The city of Isenstadt feels relatively bland in comparison. Character models are well done, but there's a sense that the graphics engine (built on the same technology of the one that powered Quake IV) isn't as state-of-the-art as it used to be. The audio is generally excellent; just close your eyes and listen to the rich sounds of each weapon as it fires.

The single-player campaign runs about as long as most; you'll probably get about six to eight hours out of it. Then it's on to multiplayer, and it's interesting in that it goes for a decidedly retro look and feel; it ditches the glossier graphics of the single-player game to give character models and animation that is reminiscent of Return to Castle Wolfenstein, the 2001 game. Yet the multiplayer modes themselves feel relatively rudimentary and they aren't as deep as the popular Return to Castle Wolfenstein mod Wolfenstein: Enemy Territory, which is puzzling. Anothe problem is that Wolfenstein is competing against another recent Activision World War II shooter, the wildly popular and deep Call of Duty: World at War. 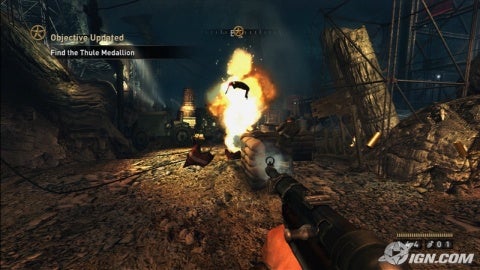 Combat has plenty of stuff that blows up.

It's hard to see Wolfenstein peeling away players from those games, especially with just three modes. There's Team Deathmatch, Objective, and Stopwatch. Objective requires one team to carry out a task and the other team to try and stop them, while stopwatch is where both teams take turns in an objective-style level and try to beat each other's times. But it basically translates into lots of mindless running-and-gunning, and the quick respawn times means that there's not much penalty in dying. Plus, the game only supports up to 12 players, which means that the matches lack the scale of other games that have 16.


Closing Comments
With almost a decade between installments, it's impossible to argue that id is trying to milk the Wolfenstein license. Yet this also means that a lot of evolution has gone on in the genre. It's admirable that Raven Software recognized this with Wolfenstein, but you can't help but wish that they developed the kernel of the ideas in this game into something more. As it is, this new Wolfenstein comes off as an engaging, though otherwise forgettable, shooter.
_________________