Gamers who want the "most limited" edition of Call of Duty: Modern Warfare 2 will be getting more than just a game.

Infinty Ward Community Manager Robert Bowling had been teasing on twitter a movie he had put together of the un-boxing of the Call of Duty: Modern Warfare 2 box. Little did we know that by "box" he meant "night vision goggles."

Let's try and calm ourselves down here and go over what's include.

First, they revealed there will be a "Harden Edition" that will retail for $80. This edition includes:

Here's the breakdown for what the "Prestige Edition" comes with:

Price of the Prestige Edition was conveniently not revealed, but I confidently predict it will cost over $100.


The original Call of Duty download will be available for PSN, XBLA, and PC. It's still unknown how much, if any, of the multiplayer modes will remain.

Update: Activision confirmed the price of the Prestige Edition. It will retail for $149 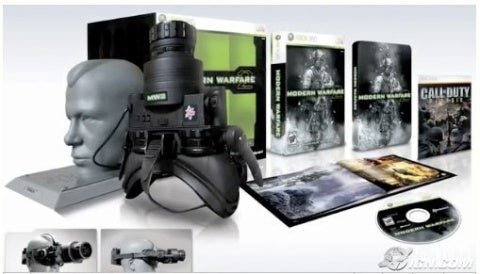